The Boxer in the Iron Mask 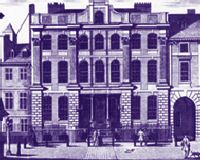 This was where boxing was invented and home of Middle Earth.

Description: 43 King Street was erected along with the rest of the Covent Garden piazza in the 1630s but was one of the first buildings to be demolished, and in 1717 it was replaced by the current building.

Originally until 1756 it was Lord Archer's substantial private mansion. Later it was rented to a peruke maker (wig maker), before it became the home of the new Royal Institute of Architects.

It has been a private home for the very wealthy, an hotel, a glamorous warehouse, a burlesque hall and a theatre.

Then it became one of the first establishments to organise and to make boxing an art.

In 1891 boxing, although supposedly regulated by the Marquess of Queensburys rules, was artless thuggery, the heaviest and stupidest fighters tended to win and the sport existed purely to sate punters bloodlust and (much like horseracing today) for the exchange of bets.

Boxing was so corrupt that one particular bout at 43 King Street descended into farce when both fighters took a dive before a punch had been thrown. The sharper of the two, realising the wrath of the ringsiders, feigned blindness while the mob set about pummelling his hapless opponent. The blind fighter was awarded the purse.

The Club realised the absurdity of the situation and set about gentrifying the sport.

At a dinner one evening in 1907, at The National Sporting Club, two gentlemen; John Pierpoint Morgan and Hugh Cecil Lowther Lonsdale (5th earl of Lonsdale and of whom boxing's Lonsdale Belt is named after) were arguing whether it would be possible to walk around the world without being identified. Lonsdale said it could be done, where Morgan said it could not. Morgan put up a 100,000 dollar (then 21,000) challenge, and boxer Harry Bensley, on hearing the argument, took it up. At that time, it was the largest ever recorded bet!

Many conditions were also placed on the bet, including that he was never to be identified, he had to finance himself (starting off with only one pound sterling), only take a change of underclothes, and he had to find a wife on his journey, without letting her know who he was. A particular route was planned consisting of 169 English towns and cities, plus 125 others in 18 counties around the world. Morgan also financed an escort to travel with him to ensure the terms of the wager were kept! 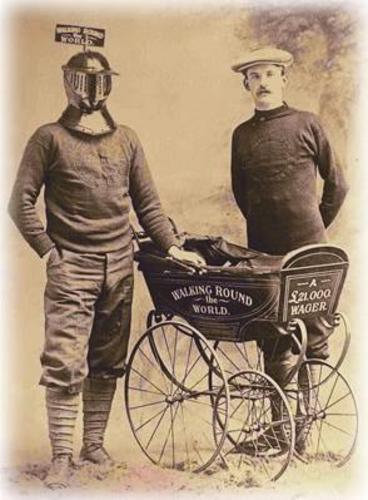 The Boxer in the Iron Mask», 0km