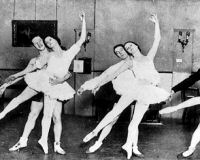 This was the first ever home of the National Ballet.

Description: The Old Mercury Theatre has a long and interesting artistic and social history. The building has been through several incarnations, most recently as a small and extremely well known London theatre until its closure in the 1980s. However, before it was a theatre the site was the first ever home of the National Ballet.

Once the home of Ballet Rambert and the Ballet Club, saw many stars and prodigy's pass through these halls including the film star Audrey Hepburn.

The First ever London Theatre», 5.1km