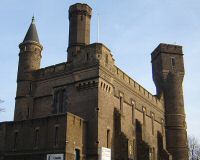 Former water tower designed like a Scottish castle with moat.

Description: The building was constructed in 1856 as a pumping-station for the supply of fresh water in east London, in the wake of a cholera epidemic.

The Castle was designed and built by William Chadwell Mylne, and is a spectacular example of the Victorian propensity for interpreting functional industrial buildings in the architectural style of earlier ages. Here it is a French mediaeval castle, complete with parapets and three different towers, set on a raised mound as if within a moat, looking like something from a Book of Hours, although Mylne is said to have taken Stirling Castle as his inspiration.

In 1995 Nicholas Grimshaw and Partners imaginatively converted the building into an indoor climbing centre and the interior is now a maze of artificial rock faces on different levels, studded with climbers like fridge magnets.