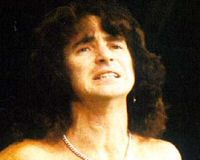 Description: This is where AC/DC lead singer and rock legend Bon Scott was found unconscious after a night's heavy drinking on the night of February 19th 1980.

After leaving London club the Music Machine at 3am, Alisdair Kinnear drove Bon back to his flat here at Ashley Court but upon arrival, he couldn't move Bon so he left him in the car.

Kinnear awoke early in the evening on the 20th, checked on Bon, and found him unconscious in the car. He rushed him to King's College Hospital, but by then it was too late to save Bon's life. Bon was pronounced dead on arrival at hospital.

The autopsy was held on Friday, February 22. The verdict was 'Death by Misadventure - Acute Alcoholic Poisoning'.

9» I am a big fan of Bon Scott he is missed dearly. (James)
Posted by James on 2009-07-27
8» I JUST THINK THAT BON SCOTT IS THE GREATEST FRONT MAN OF ALL TIME, WE MISS HIM VERY MUCH. HE WAS ONE OF THE GREAT ONES, NOBODY CAN SING LIKE HIM. WE ARE SORRY FOR YOUR LOSE. AC/DC FOR EVER. (ROD)
Posted by ROD on 2009-07-23
7» Almost correct Description. Bon lived in Ashley Court which is still there south off of Victoria street just west of Westminster Cathedral. He and Kinnear had been to a party on the 18th and Kinnear drove him back home to Ashley court but by that time Scott had passed out and Kinnear couldnt lift him out of his car, so Kinnear took him back to Overhill Road in East Dulwich and had the same problem there so left him in his car to sleep it off. Scott was found on the 19th in the evening,dead. (timmo)
Posted by timmo on 2009-05-26
6» NOOOOOOOOOOOOOOOOOOOOOOOOOOOOOOOOOOOOOOOOOOOO HE DIED NOOOOOOOOOOOOOOOOOOO (shantelle)
Posted by shantelle on 2009-05-13
5» There is a rare AC/DC song called Carry Me Home which is nearly an exact description of Bons last night alive, the simple truth is Bon knew he was going to die this way (vinnie)
Posted by vinnie on 2009-03-04
4» what wonderful friends he had, leaving him unconscious and alone in a car on a freezing night. taken way too soon, he still had so much left to give. (Misty)
Posted by Misty on 2009-02-20
3» AC/DC ROCK OUT OF THIS WORLD (king of rock)
Posted by king of rock on 2008-12-24
2» Bon Scott was a rock legend but everyone should remember him, and like Marcus said there should be a plaque at this place. (Chris)
Posted by Chris on 2008-06-16
1» would be great Bon gets a plaque at this place. (Marcus)
Posted by Marcus on 2008-05-04