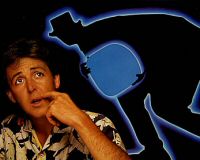 This is where Paul McCartney went busking for a film in 1984.

Description: Paul McCartney of the Beatles fame donned a disguise and went busking here in 1984. He reportedly did very well.

In a BBC Radio One interview on he said: It was for a film thing (Give My Regards To Broad Street) and it was something I'd always wanted to do, so I scruffed myself up a bit, put on a false beard and shades, and went down to Leicester Square tube station. It was really cool. A couple of people came up and said, 'Is it you?' but I just said, 'Oh, no'. But I got a few shillings and I thought, 'This doesn't feel right,' so I gave it to charity.

1» I was a Nanny in London and had been for a meal that night in China town. We stopped and commented he sounded like Paul...Oh if only. Gave a coulpe of pennies and went for the Tube, I would love to see the footage. (Di Currie)
Posted by Di Currie on 2009-11-22

A Colosseum in Watford», 15.km