The official residence and HQ of the Queen.

Description: Buckingham Palace has served as the official London residence of Britain's sovereigns since 1837 and is today the administrative headquarters of the Monarch.

Inside there are an astonishing 775 rooms including 19 State rooms, 52 Royal and guest bedrooms, 188 staff bedrooms, 92 offices and 78 bathrooms.

Although in use for the many official events and receptions held by The Queen, the State Rooms at Buckingham Palace are open to visitors every year. More than 50,000 people visit the Palace each year as guests to banquets, lunches, dinners, receptions and the Royal Garden Parties.

For those who do receive an invitation to Buckingham Palace, the first step across the threshold is into the Grand Hall and up the curving marble stairs of the Grand Staircase. Portraits are still set in the walls, as they were by Queen Victoria.

George III bought Buckingham House in 1761 for his wife Queen Charlotte to use as a comfortable family home close to St James's Palace, where many court functions were held at the time.

Buckingham House became known as the Queen's House, and 14 of George III's 15 children were indeed born here. A year later work began on remodelling the house to the King's requirements, to designs by Sir William Chambers.

George IV, on his accession in 1820, decided to reconstruct the house into a pied-terre, using it for the same purpose as his father George III.

Then he was persuaded by architect John Nash to amend his plans and they set about transforming the house into a palace. Nash retained the main block but doubled its size by adding a new suite of rooms on the garden side facing west.

George IV never moved in, and when the Houses of Parliament were destroyed by fire in 1834, he kindly offered the Palace as a new home for Parliament, but the offer was declined.

Her marriage to Prince Albert in 1840 soon showed up the Palace's shortcomings - there was an absence of nurseries and too few bedrooms for visitors. The only solution was to move the Marble Arch - it now stands at the north-east corner of Hyde Park - and build a fourth wing, thereby creating a quadrangle. The cost of this was largely covered by the sale of George IV's Royal Pavilion at Brighton. 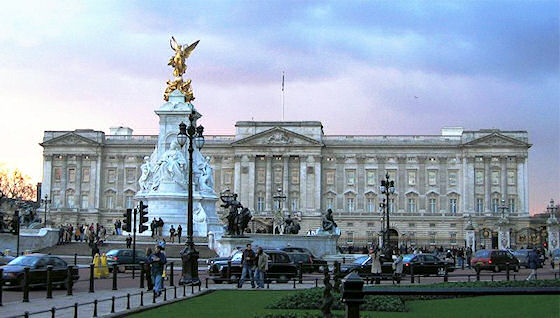