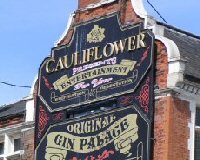 This pub is a legendary traditional London music pub.

A company called Huggins & Co took on the building contract in 1897 for Waterman and Lewis, of Cullum Street, London which is believed to be the firm that designed it. It was opened three years later and in its heyday became a popular hotel used by the elite in London and Essex. An issue of the Recorder in 1900 reviewed the Cauliflower Hotel saying: The building is probably one of the finest this side of London and is on a par with similar buildings in the West End.

Today the Cauliflower is a popular music venue that features live tribute acts, bands and themed nights - something which is said to have been former landlord George Michleburgh's dream.

Many of the original features remain. The ornate bar, clock, fireplace, antique wood and glass panels and a stained glass roof near the stage maintain the air of grandeur.

Many seminal rock acts have played here from The Small Faces and Ian Dury to the Inspiral Carpets.