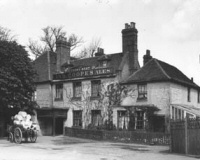 The old ferry house became the Ferry Boat Inn in 1738.

Description: The most important Lea crossing through the middle ages was to Tottenham in Mill (Ferry) Lane, requiring two bridges in Walthamstow, one over the Fleet and one over the Lea.

In 1277 Ralph de Tony was required to make two bridges in Horseholme and Smethemerse, probably for the Tottenham crossing, where several 'holms' or islets were situated.

A ferry beside the main bridge, mentioned in 1722, also belonged to Walthamstow Tony manor.

The ferry-house, which was probably rebuilt soon after 1738, became the Ferry Boat inn.

In 1760 Sir William Maynard rebuilt the main bridge as a private toll-bridge for horses and carriages. Constructed of timber with iron abutments, it was called Ferry Bridge or Hillyer's Turnpike from Sacheverell Hillyer, the ferryman and landlord of the inn.

The wily parishioners, however, claimed the right to ford the river without toll.

Viscount Maynard repaired Ferry Bridge in 1820. Iron trestles replaced the timber ones in 1854. In 1868 the East London Waterworks Co. bought the Inn and tolls, and in 1877 the bridge was freed of tolls after the corporation of London bought the rights.

The old bridge was demolished in 1915 when the present Ferry Lane bridge was built a little downstream. A new bridge over the Waterworks (Fleet) river in Ferry Lane was built by the district council in 1904.


Credits: A History of the County of Essex: Volume 6