The murder of Sir Edmund Godfrey 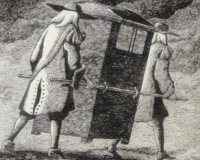 This is where Judge Sir Edmund Godfrey was found murdered.

Description: It was here that on the 17th October 1678 two men out hunting for hedgehogs had chanced upon the corpse of Sir Edmund Berry Godfrey, a prominent magistrate.

It transpired that the murder had been committed elsewhere and the body brought to Primrose Hill to be dumped. Construed as part of the Catholic Plot, it swiftly became a national scandal.

There have been many theories of what really happened to Sir Godfrey and who killed him. He might have been murdered either by Catholics, who could have been afraid that he knew some of their real secrets; supporters of Oates because of his contacts to Catholics or because he knew Oates was lying; or just by random hooligans. Some claim suicide, either because Godfrey was in a quandary between Catholics and Anglicans and, due to his contacts to Coleman, possibly under suspicion or just because of his melancholy nature. L'Estrange (1687) claimed that Godfrey had hanged himself; his brothers would have concealed the evidence lest his estate had been forfeit. It has also been surmised that the Whig leaders were responsible for killing Godfrey, partly because they understood how much he knew of the falsehood of the plot, and partly because his death could so easily and so usefully be blamed on the Catholics.