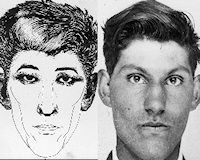 The first murder to be solved by identikit was committed here

Description: Long before number 23 became a small locksmiths, in the heyday of charing cross road and the environs being the book mecca, this was Louis Meier's antique and bookshop.

On the 2nd of March 1961 Elsie Batten, a 59 year old assistant in Louis Meier's antique shop here was stabbed to death. Her murderer, Edwin Bush, was identified and caught within days following the circulation of Identikit pictures - the first case to be solved in the UK using the Identikit System, a significant advance in crime detection.

The shop was later destroyed by fire and closed down.

1» Thanks for this insight...getting to know more and more about my half brother all the time....the infamous Edwin A A Bush! Never had a clue about the plaque! (nickG)
Posted by nickG on 2010-02-24