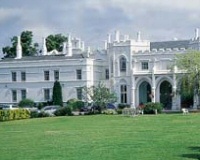 Description: The house was built in the first part of the 19th century in a style known as Strawberry Hill Gothic. It first became a hospital in 1866 and is now recognised as one of the foremost private psychiatric hospitals in the United Kingdom providing a treatment environment for the management of all major psychiatric conditions.

In recent times the hospital is better known as the rehabilitation centres for celebrities with addiction problems.

The discovery of Penicillin», 5.0km