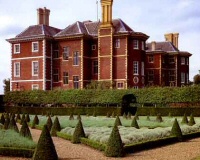 The Nose in Admiralty Arch», 9.0km

Cliveden and the Profumo Affair», 17.km