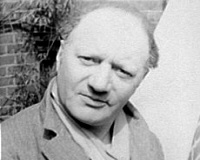 Description: Sir Jacob Epstein (1880-1959), sculptor, lived here. He was born on the 10th of November 1880 in Hester Street, New York City, in the Jewish quarter near the Bowery, the third son of Max and Mary Salomon Epstein, immigrants to America as a result of the persecutions and pogroms in Tsarist Russia and Poland.

Epstein was interested in drawing as a boy and made many studies of life in the streets around his home, crowded by Russians, Poles, Italians, Greeks and Chinese. Attracted in time to the practice of sculpture, he learned bronze casting in a foundry and studied modelling at evening classes.

Moving to Paris in 1902, he studied modelling from the nude at the Beaux-Arts School; subsequently transferring to the Julian Academy where he studied until he left Paris.

In 1905 he moved to London and took a studio in Camden Town. A visit as a steerage passenger to America failed to attract him to stay; he returned to London, settled in a studio at Fulham, and was naturalised in 1911.

In the mid-twenties, Epstein rented a house in Loughton, No 49 Baldwins Hill where, in a studio in the garden, he sculpted Rima, a memorial to W.H. Hudson, which was commissioned by the Royal Society for the Protection of Birds for a site in Hyde Park where it was unveiled by Stanley Baldwin in 1925.

In 1933, he moved to Deerhurst, No 50 Baldwins Hill, where he produced many paintings of flowers and the forest (an exhibition in 1933 was completely sold out) as well as portrait bronzes of many notable sitters.

He also crafted the bust of Arsenal football club founder and legend Herbert Chapman, which adorned and Highbury and now the Emirates Stadium.

In 1950 he finally left Loughton and moved to Hyde Park Gate which had long been his London home.

In 1938 he received an honorary LL.D. from Aberdeen and an honorary D.C.L. at Oxford in 1953; the following year he was appointed K.B.E. Epstein possessed a gracious and courteous manner, confirmed by many local residents who saw and chatted to him around Baldwins Hill and in the forest.

His conversation was cultivated and, on the subject of art, very learned. He never lost his American accent. Despite his many frustrations and the attacks on his sculpture, he was of a kindly and compassionate disposition though impatient of anyone lacking humility concerning art.

On 19th August 1959, although he was ill, he worked at his studio at Hyde Park Gate, London, on the sculpture for Bowater House, discussing the casting of it with his bronze moulder, and died the same night.

The National Portrait Gallery has a bronze of Epstein modelled by himself and drawings by Augustus John and Powys Evans.

A Refraction of Colour», 13.km