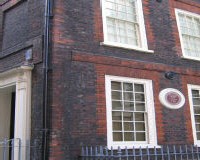 The house where the first ever dictionary was written.

Description: Dr Johnsons House is one of the few residential houses of its age still surviving in the City of London. Built in 1700, it was a home and workplace for Samuel Johnson from 1748-1759, and it was here that he compiled the first comprehensive English Dictionary.

Now restored to its original condition, the house contains panelled rooms, a pine staircase, and a collection of period furniture, prints and portraits. Situated to the north of Fleet Street, the house is found among a maze of courtyards and passages that are a reminder of historic London.

It survived the Blitz but only just. On December 29th 1940, an oil drum from a printer's ink factory nearby was blown intact onto the roof. The irony that a printer's ink factory might have destroyed Dr Johnson's house! In fact the upper stories were badly damaged but the beams charred but sound. It became a rendezvous for the Auxiliary Fire Service afterwards.

It was in the attic here that Samuel Johnson's six clerks for years were engaged in filing words and copying references, while in the tooms downstairs Johnson lived with his wife. Lucy, twenty years his senior, and widow of a Midland draper.

The house was run in part by the blind poetess Anna Williams who, when she presided over the tea table, could only tell when to stop pouring the tea when the hot fluid touched the black thumbnail she insrted into the cup. No wonder Reynolds preferred to bring his own cup along.

Johnson wrote his play Irene here, which was put on by Garrick at Drury Lane. He also wrote The Rambler, twice a week for 2 years here.

Johnson also brought a protitute who had collpased in the street back here on his back and also a freed slave who kept running away.