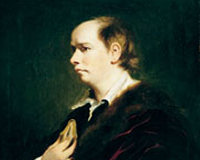 This is where neighbour Goldsmith constantly annoyed Blackstone.

Description: In 1765 author Oliver Goldsmith moved in here at number 2 Brick Court where he purchased the rooms for Â£400 and spent plenty more on the decor and furniture.

Much to the annoyance of his downstairs neighbour Sir William Blackstone, he regularly invited hoards of guests to join him in all night parties. Blackstone repeatedly complained about the constant racket from the room above.

Oliver Goldsmith lived out the remaining years of his life here and died in 1774.

Twenty years later these chambers saw resident Miss Broderick, and in expectation of a promise one evening, she paced the floor-boards waiting for her lover, Mr Eddington. When he eventually arrived - hours late - he was subjected to a grilling of such intensity that would have made any lawyer appear as a novice.

His dithering excuse was that he had been delayed by his pals down at the local. A feeble try, she thought - and shot him dead.