Creator of the A-Z born here 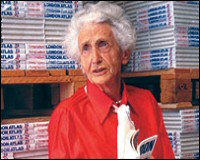 Phyllis Pearsall, mother of the A-Z, was born here.

Description: This is where Phyllis Pearsall, the creator of the famous A-Z map, was born to a Hungarian mapmaker and his Irish-Italian artist wife. She had the idea when she became lost while trying to find the homes of people she had been asked to paint.

After coming up with the idea shortly after her 29th birthday, Mrs Pearsall employed some freelance draughtsmen.

She then set about indexing all 23,000 London streets on foot, and despite scepticism and ridicule, her first A-Z London was on the bookshelves of WH Smith by 1936.

The most recent maps available at the time were the 1919 Ordnance Survey maps.

The A to Z company that Mrs Pearsall founded and supported until her death in 1996 is still going strong today, and employees from the company even meet annually to celebrate the birthday of their much-loved founder.

She was awarded an MBE for her work. She died of cancer on 28 August 1996, a month before her 90th birthday.