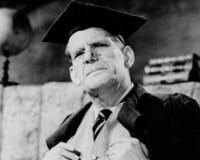 Comic actor Will Hay lived here with his lunar observatory.

Hay was a keen astronomer and found a white spot on Saturn in 1933 from his observatory here in his garden.

He also designed several astronomical instruments including a simple chronograph made from Meccano parts and a gramophone motor. Hay was modest about his work but was eventually persuaded to publish a book on astronomy, Through My Telescope, in 1935.

Born in Stockton-on-Tees, William Thomson Hay became one of Britain's most popular comedians, having soon built up his seedy, scoundrelish, incompetent schoolmaster characterisation that found its way into other walks of life.

Hay started out in music halls. In 1914, he joined the Fred Karno troupe for four years; touring in Australia, America and South Africa. His earliest radio appearances were made under the name of 'Charlie Kidd', as he did not want to risk the reputation he had built up around his stage career on the then new medium. His radio performances for the BBC were among the most popular shows of the day and he was among the top ten moneymaking British stars of the era. At the age of forty-six, and after 25 years in music halls and radio, Hay made his feature film debut in 1934 with Those Were the Days (1934). Hay went on to make 19 films in total including an enduring comic masterpiece of the British cinema: Oh, Mr Porter! (1937).