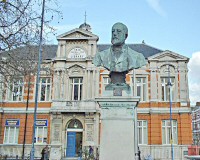 The library built by the man who invented the sugar cube.

Description: This library was built in 1892 in Victorian Classical style by sugar magnate, philanthropist and great friend of Brixton, Henry Tate.

This beautiful building houses a fine collection of literature, film and music. Tateâs widow donated the large open area outside the library as a public area. Known as âTateâs Gardenâ it is in fact largely concrete, but is home to an impressive statuary bust of Sir Henry Tate.

1» My granparents lived close to the library in Rosetta st which was demolished in the 60s and the street name was relocated close by.my grandfather drove trams and my brother Archie and I used to wait on the corner by the library in the hope of catching a tram that he was driving.In september 2007 a lovely cab driver called Richard helped me find the spot again and i spent a wonderful nostalgic moment or two close to where I enjoyed some very happy times as a chld the only way I was able to find the spot was because I remembered the library on the corner. The tate free library as I now know its called, played a very special part in my childhood. I have never been inside but next year I will! (roy taylor)
Posted by roy taylor on 2008-03-26

Emblem of the Cockney World», 2.4km