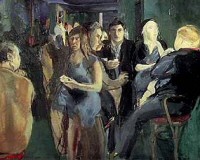 This is the infamous Muriel Belcher's Colony Rooms were.

Description: Muriel Belcher was the founder and proprietress of this private drinking club known as the Colony Room (also known as Muriel's) here.

The Room operated between 1948 and her death in 1979. A lesbian, she was considered by many to be foul-mouthed. One of her former customers remembered her as a handsome, Jewish dyke; another, George Melly said of her, Muriel was a benevolent witch, who managed to draw in all London's talent up those filthy stairs. She was like a great cook, working with the ingredients of people and drink. And she loved money.

Her sexuality attracted many gay men to the club, many of them being brought to the club by her Jamaican girlfriend, Carmel. She had an intuition that lead her to attract or discover interesting and colourful people. The patronage of men like Melly and Francis Bacon helped to establish the Colony's close-knit community. One of Bacon's friends, Lady Rose McLaren was a habitue of the club in her London days.

Belcher was famous if not synonymous for her rudeness, a trait which rubbed off onto the club and became part of its culture; with lesbian forthrightness her favourite word was cunt; this she delivered in her distinctive and ringing tones. According to Muriel the word cunt was a term of abuse, however, Cunty was a term of affection. The ultimate accolade and term of acceptance was if she called you Mary.

The George and Vulture», 1.9km