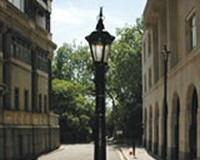 One of the old sewer gas based lamp's in London.

Description: On steep Carting Lane near the Savoy is a Webb sewer gas lamp, the bulb of which was originally illuminated by sewer gases (or, to be more direct, it's nickname was Farting Lane).

Until the 1950s, the bowel movements of Savoy guests lit up the street outside and it was a highly successful early (if bizarre) form of recycling we guess.

This was until some dozy cretin of a motorist reversed his vehicle into the column rendering it quite unsafe for a public footway, not to mention imperilling the pedestrian population to foul whiffs.

The current lamppost is now run on normal 'gas'.

1» Afraid to say this is all wrong, the lamp was not run by sewer gases. The heat from the gas lamp was used to draw up the vapors from the sewers below. Maybe to prevent the foul humors escaping and attacking passers by. (Frank)
Posted by Frank on 2010-10-15