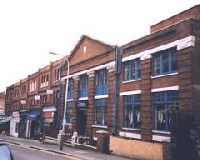 Description: This building is now a rehearsal space for English National Opera.

From 1920 until 1980, however, it was owned by Decca Records and used as a recording studio by orchestras, West End shows and the big bands that provided the pop music of the day. Nothing remains of the recording equipment, but the internal layout of the building is intact.

Two large halls dominate the interior, and down the back stairs, at the end of a low corridor, stands the heavy, soundproofed door that still bears its nameplate from the Decca days: Studio Two.

It was in this room that Lonnie Donegan recorded Rock Island Line. The Beatles, the Stones, the whole supernova of the Swinging Sixties and their lasting effect on our culture can be traced back to that moment.

The skiffle boom faded as quickly as it appeared, but its ramifications echo down the decades. On July 6 1957, John Lennon met Paul McCartney at a church fete in Liverpool, where Lennon's school skiffle band, The Quarrymen, were appearing. McCartney was a member, along with George Harrison, of the Liverpool branch of the Lonnie Donegan Skiffle Club. They decided to write some songs together.

Almost every other British rock musician of the 1960s can trace their inspiration back to Lonnie Donegan and Rock Island Line.

The Decca audition is the name given to the now-famous Beatles audition for Decca Records at their Decca Studios in West Hampstead, north London, England, before they reached international stardom. Decca's decision to reject the group is considered to be one of the biggest mistakes in their history.