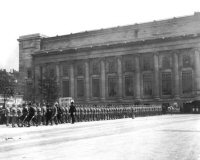 This is where an amazingly lucky war time coincidence occured.

Description: During one raid in World War II a bomb fell through the gallery roof, made a hole in the floor and failed to explode in the rooms beneath.

Some time afterwards, during another raid, a second bomb fell through the same hole and also failed to explode!

The reading room was kept open throughout the war, a great achievement.

The Edward VII galleries in the centre of the North Front were built from 1906-14 to the design of Sir John James Burnet and now houses the Asian and Islamic collections.

The Bank of England Museum», 1.7km