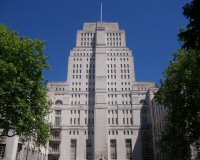 This is the inspiration for Orwells Ministry of Truth in 1984

The grand Art Deco design was the work of architect Charles Holden, who was appointed as architect in February 1931.

During the 1930s Oswald Mosley, leader of the British Union of Fascists, intended to house Parliament in the building in the event of his taking power.

Hitler also (allegedly) intended it as his headquarters in London after the invasion of Britain. Also as the second tallest building in central London, after St. Paul's Cathedral, Senate House was spared by the Luftwaffe as it provided a useful landmark for pilots navigating their way to the East End during the Blitz.

Also, a library office there may have been the inspiration for Room 101 in that novel's Ministry of Love. Also, many films have used this as a location: Batman Begins, The Day of the Triffids, Blue Ice and Foyle's War.