Studio 51 and the Stones 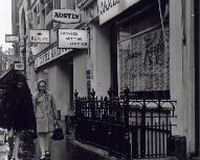 This is where the Beatles offered the Stones their first hit.

Description: This is where the Ken Coyler Jazz Club (also called Studio 51) used to be - a jazz club that turned R&B and rock & roll through the sixties. The Rolling Stones were regulars at the basement club, and its where Lennon & McCartney spotted the Stones manager walking outside and asked him for an introduction.

They there and then and here offered the Stones I Wanna Be Your Man, and it became their first British hit.

6» Yes Fran, I remember Vi and my husband, who I met at Studio 51, and I made a pilgrimage to the club about twenty years ago and Vi was still there. I believe it was a rehearsal place for dancers at that time. I also rememer Johnny Dankworth playing there in the fifties with Cleo Laine who was about 16 and wore pigtails. Wonderful memories of fantastic music. (Betty)
Posted by Betty on 2012-03-29
5» I was a very young matelot, in the early fifties and went to the club. I seem to remember Dizzie Gillespie doing a gig. Ah! Nostalgia for the greatest jazz. (Derek)
Posted by Derek on 2010-07-13
4» Does anyone remember Vi Hyland who used to run Studio 51? (Fran)
Posted by Fran on 2010-02-05
3» I was a regular visitor to Studio 51 in early Sixties. Saw some great groups there, including the Stones, the Yardbirds, the Downliners Sect, and a whole host of fantastic blues singers from America. Fabulous days!!! (David Soulsby)
Posted by David Soulsby on 2009-09-09
2» FAMOUS KEN COLYER JAZZCLUB IN 50s! (chris haskins)
Posted by chris haskins on 2008-10-19
1» (Peter D. Wood)
Posted by Peter D. Wood on 2008-09-12