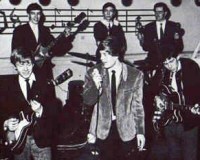 The site of the original Marquee Club, where the Stones formed.

Description: The original legendary Marquee Club was based here before moving in 1964 to Soho.

Here on July 12th 1962, a six piece Rolling Stones consisting of Mick Jagger, Brian Jones, Keith Richards, Ian Stewart, Dick Taylor and Mick Avory, played there first ever gig. With a set-list written on a page of Ian Stewartâs pocket diary, The Stones were on their way to superstardom.

The Yardbirds played here and it features in Antonioni's Blow Up.

The Marquee club opened it's doors for the first time on April 19th 1958 at 165 Oxford Street with a programme that included Kenny Baker and Michael Garrick Quartet.