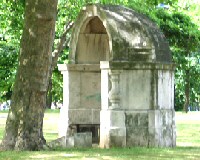 These 2 alcoves are from the London Bridge demolished in 1831

Description: These two stone pedestrian alcoves, are surviving fragments of the old London Bridge, demolished in 1831. They arrived here in 1860. This incarnation of the famous bridge (there have been two others since), stood for over 600 years and was lined with shops and houses.

With regard to these turrets, Labelye, the architect, says they were not only built for their evident accommodation of passengers, desiring or obliged to stop without interfering with the roadway, or for the relief they afforded to the eye in breaking so long a line, but for the additional security they gave to the bridge, by strengthening the parts between the arches, and thereby affording so much more weight to repel the lateral pressure.

Maitland, however, mentions a more serious purpose to which these recesses might have been put; he says they might have served for places of ambush for robbers and cut-throats, but for the establishment of a guard of twelve watchmen specially appointed for the security of the passage during the night. The writer of the account of Westminster, in the Beauties of England and Wales, mentions a peculiarity which these recesses possessed, somewhat analogous to the whispering gallery in St. Paul's Cathedral. He says, So just are their proportions, and so complete and uniform their symmetry, that, if a person whispers against the wall on the one side of the way, he may be plainly heard on the opposite side; and parties may converse without being prevented by the interruption of the street or the noise of carriages.


Tours: The Bridges That Made London

2» Though the alcoves look similar to those on Westminster bridge, as you have pointed out, they have inside them the insignia of the London Bridge Association. I imagine there were quite a number of bridges with similar alcoves on them which might help to explain why they appear in the paintings you mention. I dont think that the paintings are evidence enough to refute the first posting of this thread. (Chris Donovan)
Posted by Chris Donovan on 2007-08-01
1» Im quite sure youre wrong that these are from the old London Bridge... I think they are from the old Westminster Bridge, as painted by Canaletto... as you can see by the proximity of the Westminster Abbey. The Alcoves are quite clear in the Canaletto, as the are repeated over the whole bridge. I cannot visually identify any of them appearing on any previous incarnation of London bridge. EDITOR: The history clearly say they originate from the interior of the old London Bridge, but if anyone can corroborate Roys claim - please let us know. (Roy Nana)
Posted by Roy Nana on 2007-07-31