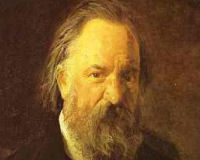 Description: On the evening of 10th April 1861, Orsett House was ablaze with light from thousands of gas-jets, and crammed with celebrating Russians, Poles and other Ã©migrÃ©s from the Slav nations, as well as a few English radicals and distinguished sympathisers-in-exile such as Guiseppe Mazzini, the Italian nationalist, and the French socialist Louis Blanc. An orchestra played from eight to 11pm, at a cost of Â£4. 'In the street outside,' writes the historian EH Carr in The Romantic Exiles, 'the crowd of curious spectators was so great that special police were called in to control it.'

Over the portico floated two home-made banners which, if the crowd could have deciphered them, would have told it what was being celebrated that evening. 'The Free Russian Press' was on one banner, and on the other, 'Freedom of the Russian Peasant'. The emancipation of the serfs had lately been proclaimed by Alexander II, henceforth 'the Tsar Liberator'. After some delay, the text reached London, and it was decided to hold 'a monster fete' to celebrate the great event. Every Russian in London, 'of whatever party', was promised a fraternal welcome by the wealthy tenant of Orsett House.
The host was Alexander Herzen, son of a Russian nobleman, founder of the Free Russian Press, editor of Kolokol ('The Bell'), author of a memoir-in-progress, My Past and Thoughts, and the first self-proclaimed socialist in Russian history. Orsett House is one of a dozen addresses Herzen occupied in London, where he lived continuously between 1852 and 1864.

Isaiah Berlin, Herzen's most distinguished and most committed cheerleader in modern times, called him a writer and thinker of genius.

Two or three decades ago, Orsett House was accorded a blue plaque to commemorate Herzen's residence. The Soviet ambassador was prominent at the small ceremony and Professor Carr was there, too. Isaiah Berlin - as he would tell friends with a chuckle - was not invited.