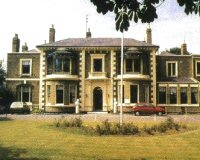 This is the retirement home of the stars.

Description: This is where one of the entertainment industries most exclusive retirement homes can be found.

The last home of such notable entertainers as Dame Thora Hird, Alan Fluff Freeman and Charlie Drake, this brown-brick building sits back off a main road, belying the fact that it is actually set within an acre of land.

One of Brinsworth's newest residents is Emily Perry, known as Pat, who is better still famed for portraying Madge Allsop, the long-suffering best friend and bridesmaid to Dame Edna Everage.

The rooms are named after famous people who pay a sponsorship fee to have titles such as The Norman Wisdom Room or The Brian Conley Room painted on doors.

The Entertainment Artistes' Benevolent Fund was founded in 1908. Brinsworth House was opened in 1911 to care for members of what was then the variety and music hall profession.

In addition to caring for the 32 residents of Brinsworth House, the Fund also provides financial help for 300 or so beneficiaries who are residing in their own homes.

4» Pleased to find this. My Great Grandma, Rosetta Sellers-later Holmes so she was known at Brinsworth as Rosetta Holmes, was also a resident at Brinsworth and was one of the film extras in The Leather Boys. We have newspaper cuttings of her confirming this. She had her own dance troup around 1809 (The Trio de Clios.) Travelled with Horace Goldin for 8 years as his Disapearing Lady, and a dancer, danced at the Folies Bergere and other places and also seems to have been a dancer in various Ballets. I would love to know more about her. I knew her and we used to visit her at Brinsworth, but I was too young to understand where I was. We have her autograph book and a kind of travel diary I think she completed at Brinsworth but she talks more of th e travels than her acting/dancing/disapearing. I think she must have known Karl Edwards. A man called "Matty" also seems to figure in family memory. Insanely, the most comprehensive newspaper article we have about Rosetta is about her being bitten by Mosquitos in New York while working at the Palace Theatre, presumably as Horace Goldins Disapearing Lady in 1913. (She began her career in Lord George Sangers Circus riding an elephant.......I am also trying to write a book about her. (Jacky)
Posted by Jacky on 2012-01-04
3» My Great Grandfather, Karl Heath Edwards worked in Panto at the turn of the century. He resided at Brinsworth House, where he passed away in 1962. It would be wonderful to know if there was any information available about Great Grandpa Karl. I have many letters that he wrote while at Brinsworth House. In the early 1920s Karl was cast in Schueberts Lilac Time. Karls grandchildren, great grandchildren and great great grandchildren have carried on his love of theatre and the arts. Thank you for your care of my great grandpa! (Nancy Edwards, North Bay, Canada) (Nancy Edwards)
Posted by Nancy Edwards on 2011-11-06
2» Good aftrenoon, My great grandparents were both in Brinsworth House, Monty Bentley paralyzed after a fall from a high wire was admitted on 25 October 1918 and he died at Brinsworth in December 1919 Monty was a high wire artist and a contortionist and he was married to Rose Elliott who was admitted on May 20th 1939 and died on December 1950. Rose was a music hall singer and dancer and lived both in the UK and America. If anyone can point me in the right direction of where I can enquire about them I would be most grateful. I understand from my mother that Margaret Lockwood did a film about the life of Marie LLoyd and an article was written in the Picture Post that mentioned Rose Elliot as a contemporary of Marie LLoyd. Montys real name was Maurice Purcell Flynn and Rosess real name was Charlotte Annie Flynn. Best wishes Trish Flynn (Trish Flynn)
Posted by Trish Flynn on 2009-06-27
1» Good morning. Our family history confirms that Marie Loftus was a resident at Brinsworth House, where she died in 1943. She was my great-grandmothers cousin. Miss Loftus was a phenomonally successful international music hall artiste and pantomimist in her time. Her daughter Cissie Loftus was also very famous and talented and made the transition to Hollywood via Broadway and the touring company of Sir Henry Irving. Both of these women have been largely forgotten. I am looking to write a book. (Mary Hill)
Posted by Mary Hill on 2008-06-04