Jack Warner and the CAA 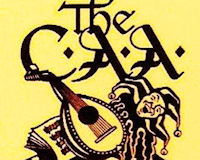 Description: Founded in 1897 as the Concert Artistes' Association to help concert artistes experiencing hardship, by an entertainer called George Robbins. He recognised the need and began talking to fellow entertainers about his proposed society and it was established with 55 founder members in a room on the third floor of 156 Strand.

Members were all male to begin with and the first females were not accepted until January 1900.

Functions called 'At Homes' were held during the winter in various banqueting rooms, to raise money for the Benevolent Fund, used to help artistes with fares, costumes and during rehearsal periods.

In 1949 when moving to new premises here in Bedford Street, a 10-year lease was negotiated but obtaining the mortgage was a problem. In dire trouble, the CAA turned to Dixon of Dock Green actor Jack Warner to help. He persuaded J Arthur Rank to stand guarantor for the mortgage, and the loan was paid off, enabling the CAA to own this prime property in the West End.

Where Oscar Wilde was arrested», 1.7km