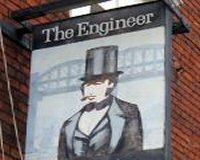 The pub built by Brunel for the canal-side brewery here.

Description: The Engineer pub here was built between 1845 and 1850 for Claverts the Brewers by, it is thought, Isambard Kingdom Brunel, hence the name. It is thought that Brunel had his offices in the building for a while.

This grade two listed building is built of brown stock brick with a stucco ground storey and stucco dressings in the Italianate style. Of particular interest are the projecting iron light fixtures in the form of dragons left and right of the entrances.

There is also thought to have been a secret tunnel leading from the nearby Grand Union Canal directly into the cellars here, but this has long since been blocked off.

Apparently there was a slot at the end of the tunnel for checking coins, (presumably if they were counterfeit they would bend).

The Engineer's grounds originally ran all the way down to the canal, and situated in them was a brewery run at first by a woman.

In 1995 the tenancy was taken over by Tamsin Olivier an actress and Abigail Osborne an artist and The Engineer as we know it now was born.