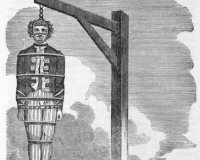 This is where pirate Captain's Kidd's body was hung for 2 years.

Description: Captain William Kidd's body was hung here in a gibbet after death for more than 2 years.

A Scottish merchant and privateer, Kidd (1645-1701) was undone when he landed in Madagascar and struck his gunner William Moore with an iron bucket. He died within 24 hours from his fractured skull, and on Kidd's return to London he and nine of his crew were arrested.

He was found guilty at the Old Bailey and was hung at the Execution Dock in Wapping before being drowned under 3 tides (usual for pirates).

Kidd spoke from the gallows and warned all ship-masters to learn from his fate. As the cart was drawn away from the scaffold, the rope around Kidd's neck broke, leaving him floundering in the Thames mud as the other condemned men hung. Still drunk, and now covered in mud, he had to be helped to his feet and man-handled back on to the gallows for a second time - the praying Chaplain in attendance. A new rope was hastily thrown around his neck and he was eventually hung. After the symbolic triple drowning his body was taken to Tilbury Point where it was left to hang in chains for over two years. The body's lasted this long because they were covered with tar to protect them from the elements and birds.

It was the custom to display the corpses of the more notorious pirates at places along the river where they would be seen by the crews of all ships entering and leaving the port.

The body of Captain Kidd was left suspended at Tilbury Point on the lower reaches of the Thames. It would have been visible there for an hour or more as the ships navigated Sea Reach. That was the broad stretch of the river that curves around the desolate point. 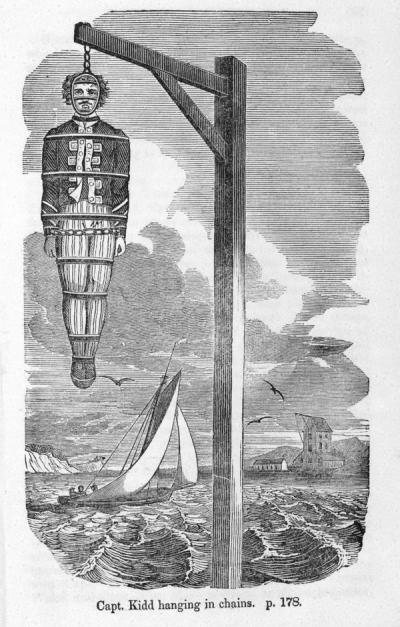 
Manson and the Talgarth Hotel», 25.km