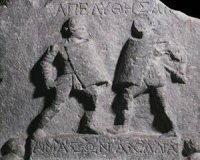 The location of the discovery of a female Roman gladiator.

Description: In September 2000, the Museum of London announced a spectacular discovery that the grave of a purported gladiator, probably in her twenties, dating to the first century CE, had been unearthed here.

However, it was not the rarity of the find that captured international attention nor even the fact that the grave was supposedly that of a gladiator. To the surprise of all, the broken and burnt remains in this grave proved to be those of a woman.

Interestingly, female gladiators were not all slaves or women of low social status simply in need of money. Tacitus reported that women of considerable social standing participated in gladiatorial events, evidently for excitement and notoriety, not money, since they were already members of the wealthy class.

The grave was outside the walled Roman cemetery, indicating that the deceased was probably an outcast of normal society. This evidence led the scholars at the museum to speculate: Why was such an elaborate and expensive funeral held for a woman who was buried in an area designated for social outcasts? Their answer was simple. The woman buried in this grave was respected, yet not respectable