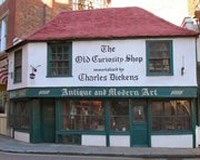 The oldest shop in London dating from 1560's.

Description: This 16th century half-timbered building that reputedly served as the model in Dickens's imagination for the original home of Little Nell and her grandfather in The Old Curiosity Shop (1840-41) was initially a dairy on the estate that King Charles the Second presented to one of his many mistresses, the Duchess of Portsmouth, in the late seventeenth century.

The building, dates from around 1567, is almost certainly the oldest shop in central London. Now protected by a preservation order, the building, with its overhanging upper storey, gives visitors an idea of how a London street would have appeared before the Great Fire of 1666.

It's highly unlikely to be the shop Dicken's actually based it on, especially as those who've read the book may recall the passage at the end stating that it was 'pulled down long ago'.

2» A shoe horn has recently come in to our posession it looks like it is made of brass and it has the old curiosity shop on the handle with the date or number 1837 on the front please could anyone give me any information on this item thank you. (pam)
Posted by pam on 2008-01-01
1» Hi I saw an exhibition here not long ago and I wondered if you could still hire it out? thanks (jennie)
Posted by jennie on 2007-08-06