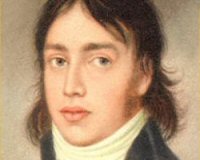 This is where Samuel Coleridge lived, wrote poetry, and died.

Description: Samuel Coleridge (1772-1834) died of heart failure here, and is buried in St Michael's at The Grove.

He was an English poet, critic, and philosopher who with his friend William Wordsworth, was one of the founders of the Romantic Movement.

He is probably best known for his poems The Rime of the Ancient Mariner and Kubla Khan, as well as his major prose work Biographia Literaria.

In 1817 Coleridge, with his addiction worsening and in depression, his family alienated, moved here at the home of the physician James Gillman. He composed much poetry here and had many inspirations a few of them from opium overdose, mostly in the top floor room - now called the Coleridge Room.

The author of Rime of The Ancient Mariner and Kubla Khan died of a lung disorder eventually causing heart failure probably from the opium that he was taking on July 25, 1834.

He was also one of the Lake Poets.

Fellow author JB Priestley also lived here later, between 1935 and 1939, and he extended and renovated the house. His walks around Highgate and up from Whitestone Pond inspired many of his famous talks.

1» This is where model Kate Moss lives, and is causing local upset for her plans for renovating this historic property. (Julia Marks)
Posted by Julia Marks on 2011-09-03