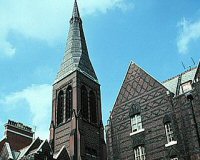 This is one of William Butterfield's gothic masterpieces.

Description: Who can argue that William Butterfield's All Saints is anything other than brilliantly original? Here stands no gothic copy. It is a reinterpretation of the medieval style in a completely contemporary way and, in my opinion, one of London's greatest buildings, on a par with St Paul's Cathedral or the Henry VII chapel at Westminster Abbey. All Saints had a huge influence on young Millais (the pre-raphaelite artist), who was challenged by Butterfield's astonishing take on the Gothic and produced with his mentor John Ruskin, designs for another church. (Andrew Lloyd Webber)

The church owes it origins to the Cambridge Camden Society (from 1845, the Ecclesiological Society) founded in 1839 with the aim of reviving historically authentic Anglican worship through architecture. Its influence was substantial, and by 1843 its 700 members included the Archbishop of Canterbury.

A chapel had stood on the site - midway along Margaret Street, which runs parallel to the eastern half of Oxford Street - since the 1760s, which from 1839 had been used by a Tractarian congregation, and who agreed that the Ecclesiological Society's model church could be built there.

Religious Phrase With A Twist», 1.3km