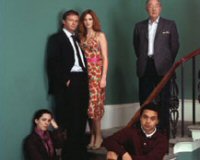 This is where Stephen Poliakoff's drama Joe's Palace was filmed.

Description: This is where the interiors of the Stephen Poliakoff drama Joe's Palace (screened November 4th 2007) were filmed. The drama starring Michael Gambon was based in Mayfair but the house's grandeur was filmed here.

Stephen said: Langley Park outside Slough was used for the interior shots of the film, and even inspired details in the script. For instance, there is a finely wrought door and a strange Sixties conservatory which Stephen incorporated into the drama.

Poliakoff explains the inspiration behind the Mayfair mansion:

I've always held onto this image from my childhood. My father knew this millionaire who'd bought a building in Piccadilly. To my child's eye, it seemed to be always empty, but at the same time, it was being kept alive.

It was an amazing thing to have this gleaming, opulent building just standing there with apparently nothing happening in it. Mayfair is full of such secret properties.

They are tremendously important places. I'm haunted by the fact that so much of 20th Century British life has been governed by what went on at these great London mansions. At the same time, these houses can be tainted by the past, and the darkness of the past certainly infiltrates Joe's Palace.

The house (Stiff Leadbetter, 1755-58, listed grade II*) lies at the centre of the site, built as a hunting lodge for the 3rd Duke of Marlborough c100m south of the C17 Kederminster house.