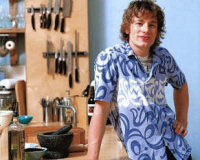 This is where Jamie Oliver filmed his Naked Chef series.

Description: This is the house made famous by Jamie Oliver's BBC series The Naked Chef. Jamie Oliver and wife Jules lived in the property for the seminal first series of Naked Chef in 1999 while filming.

For the second series they moved out and the BBC rented the property from the current owners.

Since the Naked Chef the whole property has now been re-vamped and extended to maximise the living space but it still retains its best known features, the kitchen and fabulous spiral staircase.

The home offers the best in state of the art living, comprising of five plasma screens including a waterproof screen in the spa bathroom, fibre optic mood lighting, gym, bespoke kitchen, an integral garage, and solar panels.

The two-bedroom house, on a quiet road between Londons hip Old Street and Clerkenwell, is only five minutes from Jamie Oliver fifteen restaurant.

Each episode started with him coming out of the door, hopping on his scooter, and scooting off down Chequer Street.