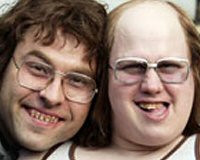 This is where Little Britain actually exists as a street.

Description: Little Britain is an actual street here running from St. Martin's Le Grand in the east to West Smithfield in the west. It is the northern boundary of St Bartholomew's Hospital.

Historically, Little Britain referred to a district in the City, including this street. It is mentioned by Kip in Charles Dickens' book Great Expectations as the location of Jaggers' office.

Washington Irving described this district in The Sketch Book of Geoffrey Crayon published in 1820. The opening paragraph begins:

IN the centre of the great City of London lies a small neighborhood, consisting of a cluster of narrow streets and courts, of very venerable and debilitated houses, which goes by the name of LITTLE BRITAIN.

The name was of course adopted by the television comedy series starring Matt Lucas and David Walliams.