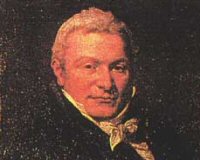 This is where Pugin lived and painted his famous portraits.

Description: This is where Augustus Charles Pugin (1768-1832) lived. He was an Anglo-French artist and architectural drafts man. He lived most of his life in London in the late 18th and early 19th Century.

He was famed for his portrait works and in fact had his studios in Great Russell Street underneath this marvellous house which he loved so much. Pugin has work in many of the major galleries of the world.

When he resided here it was then numbered as number 105, but the road was renumbered in the 20th century.

He died here after a long illness on 19th December 1832. Mrs Pugin survived him until the following year when she passed away on the 28th April 1833. Both were buried in the Church of St Mary's in Islington.

He was born in Paris, France, but his father was Swiss, and Pugin himself was to spend most of his life in England.

Pugin left France during the Revolutionary period for unclear reasons and entered the Royal Academy Schools in London in 1792. Shortly afterwards he obtained a position as an architectural draftsman with the architect John Nash. After considering and abandoning a career in architecture Pugin married and settled on a career as a commercial artist working primarily for publishers of illustrated books. He was a skilful watercolourist as well as an accomplished draftsman.

Pugin produced views of London, and plates for books about Westminster Abbey, Oxford and Cambridge universities and Winchester College. he often collaborated with other artists, among them Thomas Rowlandson. His later works included illustrations for Specimens of Gothic Architecture (1821-23), The Royal Pavilion at Brighton (1826), Architectural Antiquities of Great Britain (1826), Specimens of the Architectural Antiquities of Normandy (1827), Illustrations of the Public Buildings of London (1825 to 1828), and Paris and its Environs (1829 to 1831), and Examples of Gothic Architecture (1831). He also produced a book of furniture designs called Gothic Furniture, and assisted architects with detailing for their gothic designs.

Pugin's Drawing of the Exhibition Room at Somerset House can be seen below. 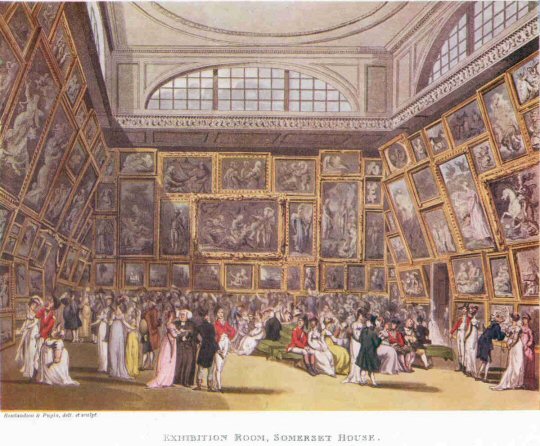 The home of Lucien Pissarro», 5.1km