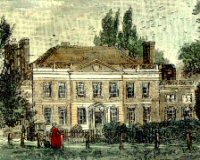 This is where the old Barn Elms House once stood.

Description: This is where the old Barn Elms house used to be, before it burned down and was demolished in 1949. The Kit-Cat Club met here, when publisher Jacob Tonson was living here and he built a room specially for the club here.

The club originally consisted of thirty-nine, afterwards of forty-eight members, and included among others the duke of Marlborough, Lords Halifax and Somers, Sir Robert Walpole, Vanbrugh, Congreve, Steele and Addison. The portraits of many of the members were painted by Sir Godfrey Kneller, himself a member, of a uniform size suited to the height of the Barn Elms room in which the club dined. The canvas, 36 X 28 in., admitted of less than a half-length portrait but was sufficiently long to include a hand, and this is known as the kit-cat size.

Now the open space is a natural and sporting haven within the northern bend of the river.

In the 1770s the formal lake was enlarged and made into a serpentine formation in the Capability Brown style. Some large Plane trees remain from the late 17th century - one of exceptional size is mentioned in Alan Mitchells Guide to the Trees of Britain and Northern Europe. It takes six people to reach around the trunk!