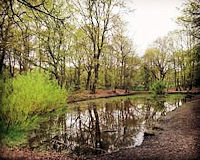 Description: Just off Kingston Road is this innocuous rectangular pond with a curious name, The Curling Pond. Its the smallest pond here and very shallow, often drying out most summers.

In early winter 1895 the London Scottish Curling Club had 'just started a new pond on Wimbledon Common, near the Iron House and tall flagstaff'. It noted that in Scotland, golf is played when the ground is soft but in winter players take to the ice to curl. Although successful in Scotland it had yet to take off in England, so this venture was part of an initiative to support its growth in England.

Curling Pond is the smallest of the Commons' ponds. It is very shallow and is apt to dry out during all but the wettest of summers.

The Birdman of Winchmore Hill», 14.km