The Devils of Cornhill 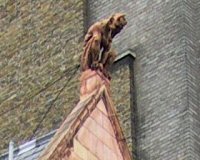 The famous devils of cornhill - mocking the naive locals.

Description: In the nineteenth century a very observant vicar at this church noticed that plans for building a new structure next door intruded by one foot onto church territory.

He raised legal objections and forced the architect to redraw their plans.

In gleeful triumph he added three terracotta devils to the building facing Cornhill from the South. These can easily be seen silhouetted against the sky if you stand on the north side. They were reputedly to mock those locals who supported the ill-fated plans.

One of the devils spits, another sticks its fingers up, and all of them cast grotesque greetings down onto parishioners entering the church. The devil closest to the street apparently bears more than a passing resemblance to the unlucky rector.


Perfect for looking at Stars», 1.8km

The Devils of Cornhill», 0km