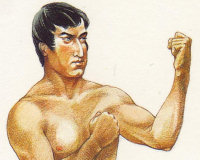 This is where The Father of Boxing Dan Mendoza ran his pub.

Description: This is where legendary Jewish East End boxing champion Daniel Mendoza (1764-1836) retired to run his pub from. It was called The Admiral Nelson (later The Lord Nelson), which moved at some point to 299 Whitechapel Road and closed as a public house in 1983.

He was known as The Father of Scientific Boxing and published a book in called The Art of Boxing.

Mendoza's Memoirs report that he got involved in three fights whilst on his way to watch a boxing match. The reasons were: (a) someone's cart cut in; (b) he felt a shopkeeper was trying to cheat him; (c) he didn't like how a man was looking at him.

The actor Peter Sellers was a descendant of Dan Mendoza. Prints of the boxer can be seen on Inspector Clouseaus wall in the Pink Panther films.

1» 145 Whitechapel Road is now the forecort of a Shell garage and 299 is a local fashion shop. No signs of the two pubs remain but Mendozas house at 3 Paradise Row in Bethnal Green is still fully in tact. (Joe)
Posted by Joe on 2008-01-06