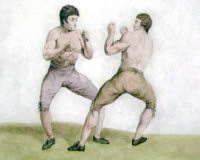 Description: This is the house that the first Jewish boxing champion lived in from 1788 - the legendary Daniel Mendoza (1764-1836).

Mendoza once lost a bout because his opponent grabbed his long hair and pummelled his face, causing a change in the rules that all boxers must have short hair.

He was proud to be Jewish and he billed himself as The Jew Boxer.

On his retirement from the ring he wrote a book called The Art of Boxing here.