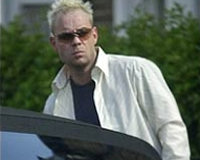 This is where E17's Brian Harvey run himself over.

Description: I'd been stuffing my face with jacket potatoes, said Brian Harvey. They were big. I put cheese on, then tuna mayonnaise and I ate the lot.

It was May 31 2005 and Harvey was enjoying a late-night potato feast at home here in Walthamstow. At around 1am he left to drive to a friends house and promptly got lost.

As he backed his Mercedes convertible out of a cul-de-sac, the baked spud overload was making him feel queasy. He opened the door to vomit on the road. Instead of putting my foot on the brake, I hit the accelerator and it flew back, he said. It must have hit four or five parked cars and thrown me out of the car.

He was flung on to the road and somehow got crushed between the open door of his car and a wall, forcing him under his own vehicle, which was by this time rolling at quite a speed. Harvey managed to crush his pelvis in six places; his stomach was pushed into his chest, resulting in one of his lungs collapsing; doctors reported that his leg was broken so badly that it was turned in completely the opposite direction.