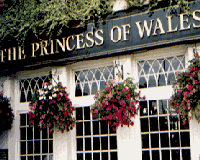 The most famous Rugby Union pub in the World!

Description: The World's oldest open Rugby Union club was founded in 1858 and had it's headquarters here in this pub.

There's a plaque outside about it, and a second here recording that the first Rugby Union international, Scotland on the 25th of March 1871, was organised here as well.