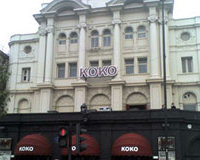 Description: This old theatre hall has enjoyed a vast and colourful past, beginning life as The Camden Theatre on Boxing Day 1900 and opened by the famous actress Ellen Terry, with a seating capacity of 1600.

In 1909 the theatre was renamed The Camden Hippodrome and was a variety theatre where famous names such as Charlie Chaplin appeared. In 1911 film seasons began and it became a proper cinema in 1913.

Live acts were still used to support films in 1928 Novelty Nights were introduced on Fridays with up to seven live acts appearing before the film. In 1933 the cinema was wired for sound and free Christmas performances were given to the local children. The cinema closed in 1940 and for some 20 years from 1945 the building became a BBC Theatre and shows included the famous Goon Show.

In 1970 the venue was reincarnated as The Music Machine and provided a platform for the first wave punk bands such as The Sex Pistols and The Clash.

Subsequently purchased by Steve Strange and Rusty Egan of Visage in 1983 the Camden Palace was born the venue then holding court to the leading figures of The New Romantic scene and in the process hosting the earliest gigs of the Eurythmics and the first UK performance by a rising star known as Madonna. Not forgetting, of course, those Nutty boys of Camden Town Madness.

The Camden Palace continued to move with the times and in the 90s was home to a series of dance nights. It closed in February 2004 and after a six month, multi million restoration project was undertaken to a the singular brief of creating a 21st Century entertainment venue from what was left of the glorious 19th Century building.

Bon Scott's last party on the night he died was here when it was still called the Camden Palace and when he drunk himself silly.

The video for the Placebo's Because I Want You single was shot here in 2006.

Mozart and the Hare Cutter», 1.7km