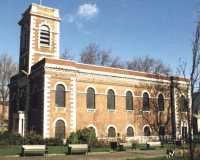 It was here that a crazed bull interrupted the church service.

Description: As early as 1690 negotiations were commenced for the creation of a separate parish of Bethnal Green. Nicholas Hawksmoor, then a pupil of Christopher Wren, drew up plans for a large, basilica-type church, which was to be built by the Fifty Church Commissioners.

The church was finally completed and dedicated on 15 July 1746.

In 1859 the interior of the church was destroyed by fire. The night of the fire was so cold that the firemen were covered in sheets of ice as they struggled with the flames.

In 1940 bombing destroyed or damaged all of this and the church was left as a roofless shell. A temporary church was built within the walls, the architects being Wontner Smith and Harold Jones.

In 1957 it was decided to rebuild the church and Antony Lewis was appointed architect. Work began in 1958 and the temporary church was demolished in 1960 and the present church was re-consecrated on 15 July 1961.

The problems of a poorer community and a cultural distrust and disinterest in religion have been as much a part of the priests work at St Matthews historically as they are today. Very soon after the churchs consecration Vestry records show that several hundreds of the local people were holding their Sunday pastimes of bull-baiting and dog-fighting in the field adjacent to the churchyard. There was particular outrage on the day the terrified bull ran into church during the morning service.

In recent times it has seen the infamous funeral services for Reggie and Ronnie Kray - revered local heroes. 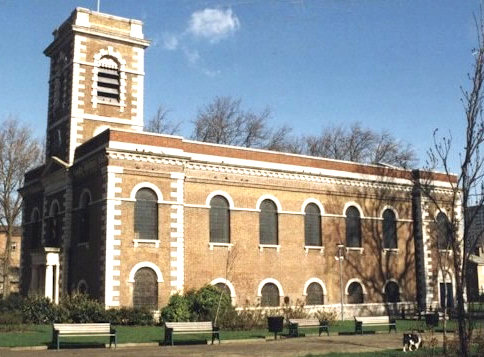 Religious Phrase With A Twist», 3.1km