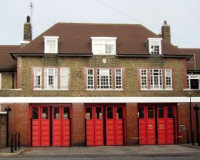 This is where the original London's Burning TV series was filmed

Description: This is the fire Station used as the original 'Blackwall' Fire Station in the ITV series 'Londons Burning', about half a mile from Tower Bridge, as the exterior for Blackwall.

The Jacob Street studio is opposite, housing a full scale reproduction of the mess, built by Colin Monk.

Later on in the series, the exterior of Leyton Fire Station and the (soon to be converted into flats) Oliver Twist pub opposite were used.