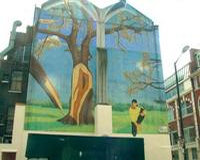 Description: This mural on the corner of Poland Street and Noel Street, brightens up this ugly part of Soho. It was painted in 1989 by Louise Vines and is entitled 'Ode to the West Wind' after Shelley's famous poem.

It depicts a great tree splitting at its trunk, while a man reads casually from a book in the foreground.

Underneath is a blue plaque commemorating Shelley's residence in Poland Street.